Since writing the first post on this blog about the 741 op amp I’ve managed to get my hands on a few more 741s to dissect. Three of these I bought new, and two more I found back in some forgotten corner of my lab.

First up, a brand new National/TI LM741. Although National Semiconductor was acquired by TI in 2011 and they stopped using the National brand soon after, the LM741 that you can buy in 2020 still has the National logo on it. I can’t figure out why though, because changing the logo on the package is as simple as reprogramming a printer (which happens anyway because it needs to print a new date code every week or month).

The package looks rather like the old one, except for a different printing method. I’m not sure how exactly the date code works: my old LM741s have “JM15AD” written on them, where this new one has “94AHL6G3”. 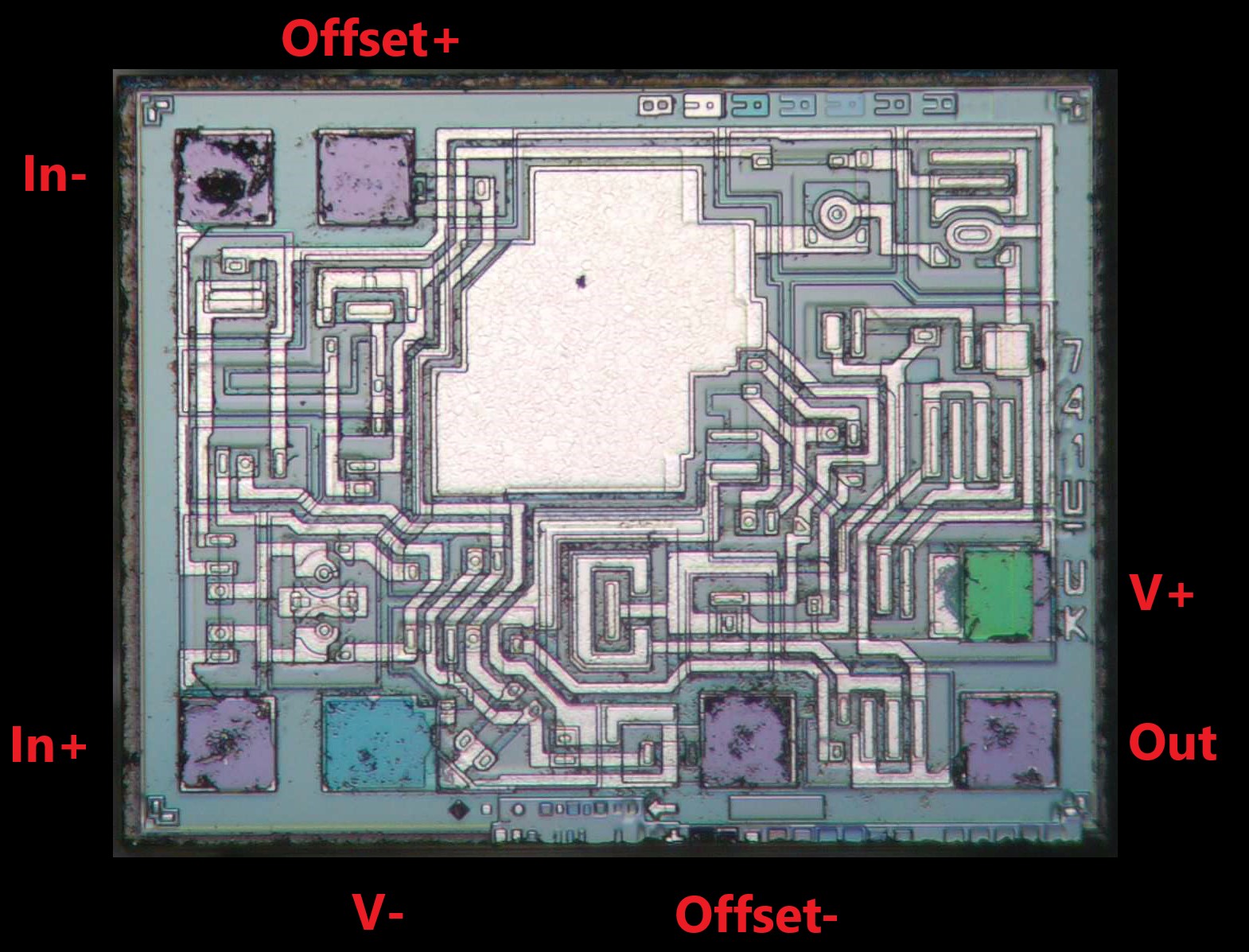 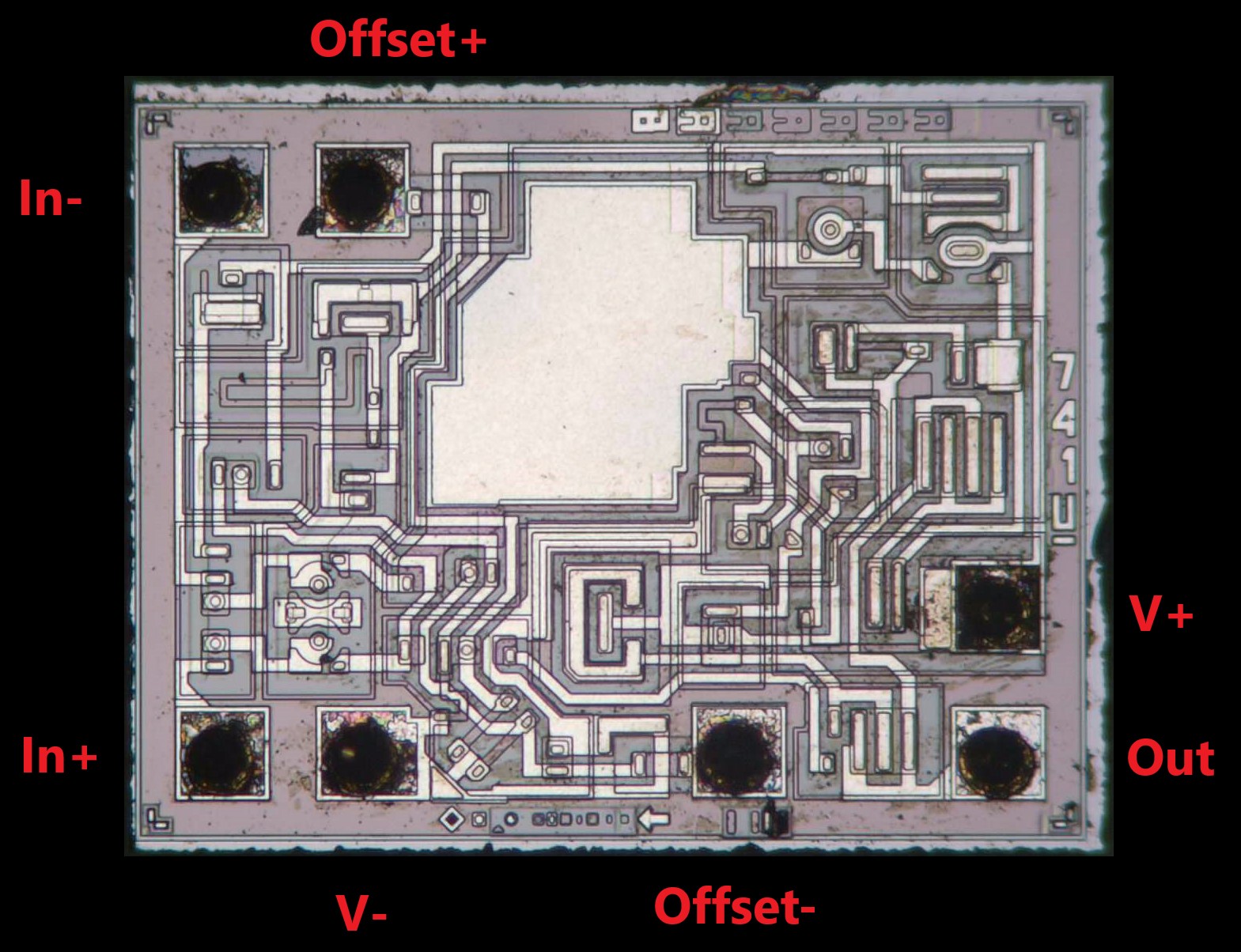 Here’s a side-by-side comparison of the old die and the new one. The layouts are identical, except for the “UK” on the far right side of the die. As I mentioned before, this could refer to TI’s Greenock fab (GFAB), and the fact it’s missing on the new die would then be because it was made in a different fab. Whether that’s because TI/National were making 741s in several fabs, or because LM741 production was moved elsewhere after TI sold GFAB to Diodes Inc in 2019 is unclear.

It’s also interesting to note that the metal layer revision level is “B” in both versions (the letter at the top, right next to all the “A”s). You would normally expect a new revision if the layer is changed, even for such a small thing as removing a letter or changing a logo.

In this case I’ve chosen an SOIC package. It has the TI logo on it, the name UA741C, and some date/lot codes. 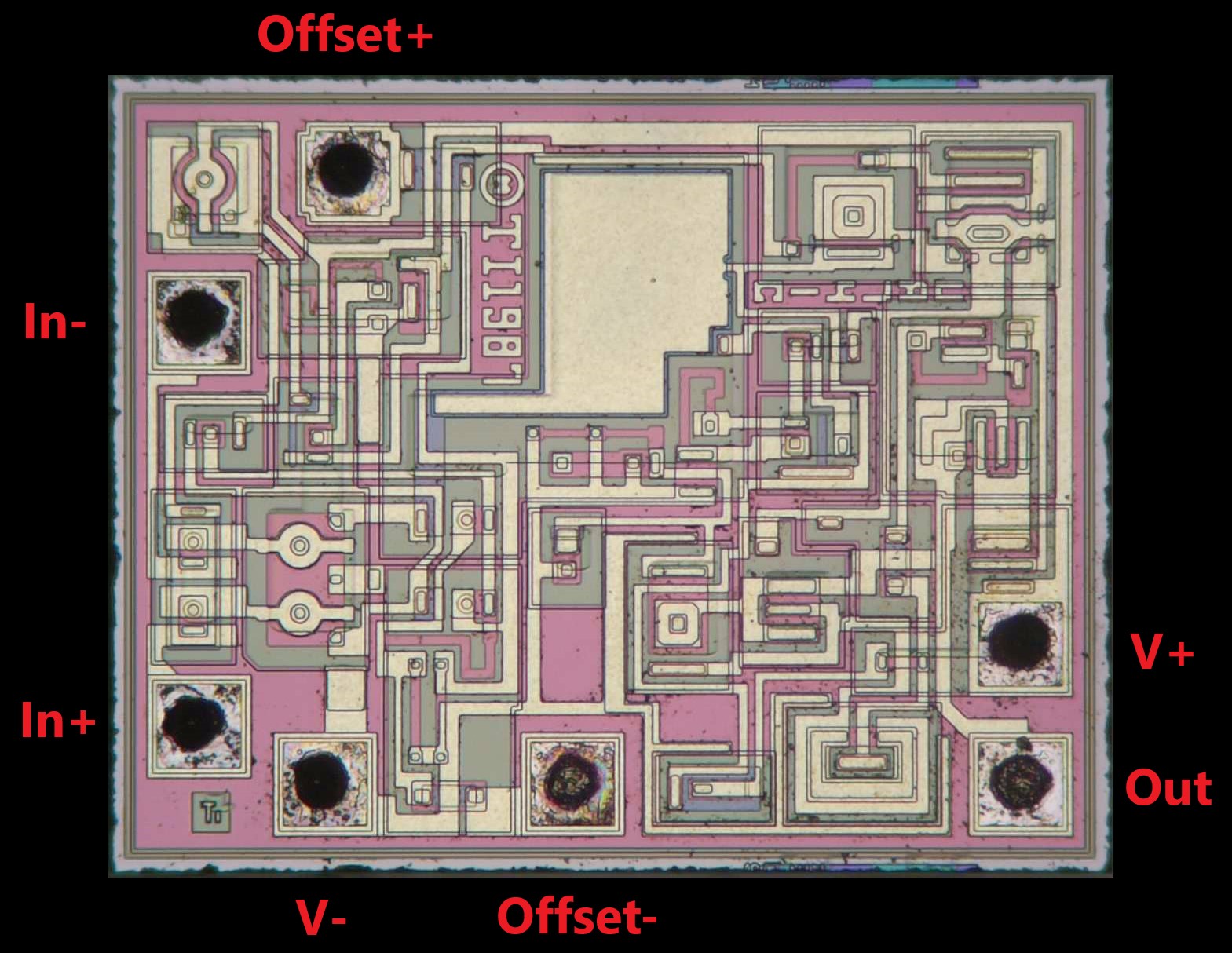 Inside it’s an entirely different beast than the old part we looked at earlier; the dies are not even similar. The “new” part has a small TI logo on the lower left, the identifier UA741C, and a 1987 copyright date! This shows that this design has been in production for over 30 years with no changes, but it also makes you wonder how old the earlier 741 was. Unfortunately there’s no date code on the older die and the package markings don’t provide a clear answer either. The two dies appear to be made in entirely different processes, with circular PNPs on the new one.

ST is the other manufacturer still producing 741s today. Here is a brand new UA741CD, the SOIC version of the commercial grade 741. 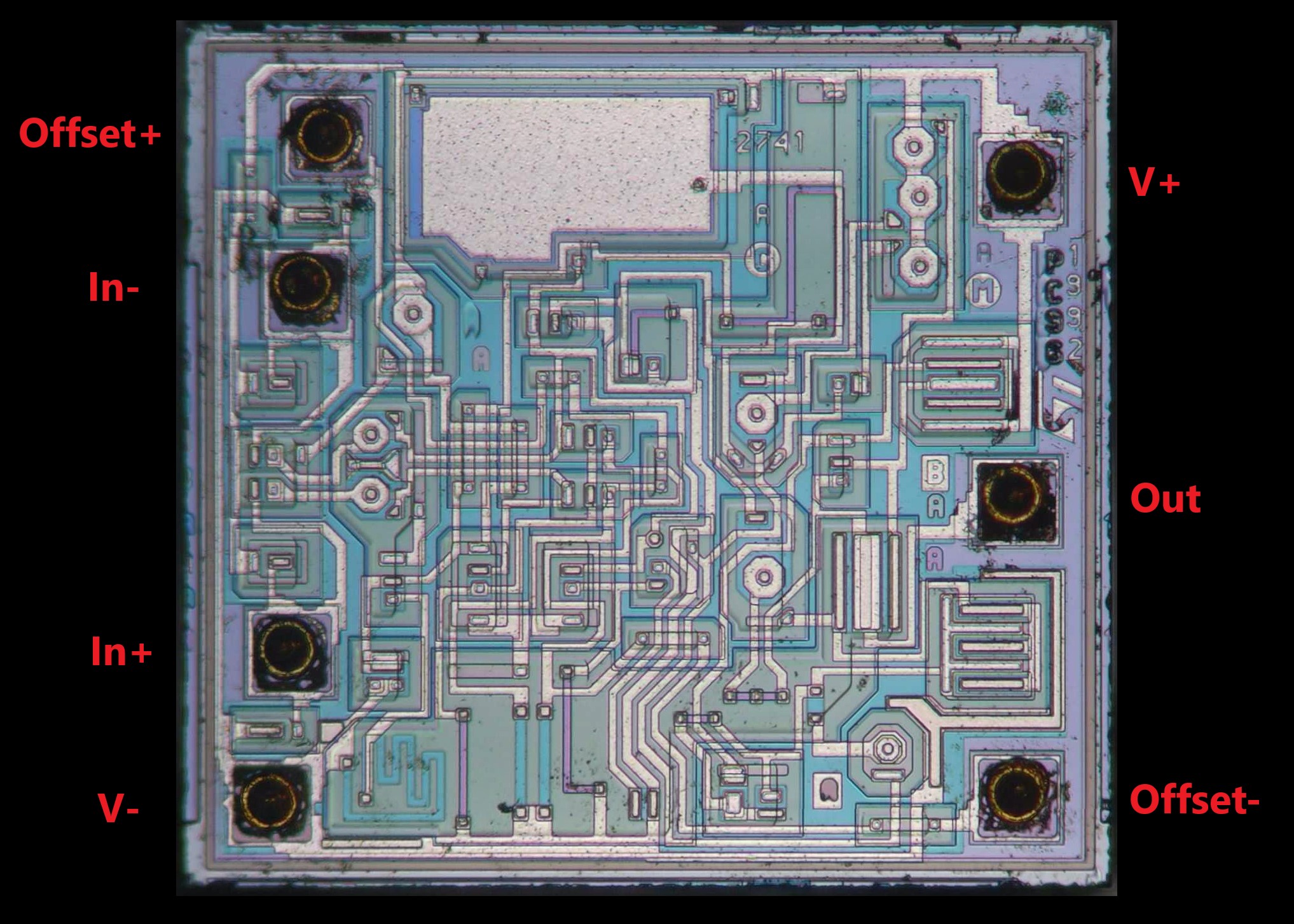 ST did apparently choose to slightly update their design at some point: the old one is labelled 1992, the new one is from 2001. The layouts are largely identical, but a few changes can be seen: the compensation capacitor has become longer and narrower, the wiring around the supply and output pins has been reshaped a bit and the revision letters (all “A” in both cases) have been moved around.

I also found a couple of ML741CS devices from 1974. These were made by a company called Microsystems International, based in Ottawa and spun out from Northern Electric in 1969. Although MI produced a number of successful chips during its lifetime, it struggled to become profitable and ceased to exist as a separate company in 1974, being absorbed again by Northern Electric. NE later became Nortel Networks and produced a wide range of telecommunications equipment before collapsing as a result of several scandals in the early 2000s.

The package is a standard 8-pin DIP as seen on most 741s, but it uses a different type of plastic: it’s grey instead of black and it feels very smooth, unlike the somewhat grainy structure of most plastic ICs. It is also extremely tough, and I had a hard time extracting the chip without damaging it.

In fact, I failed that last part: although the chip is not cracked or broken, most of the metal layer came off and remained inside the package. The only metal left on the die is that surrounding contacts and a few small traces like the J-shaped trace near the large transistor on the lower right. There’s also a blob of plastic remaining on top of the compensation capacitor that I can’t manage to get off.

It’s actually quite interesting to be able to clearly see the transistors without all the metal wires on top. The input transistors are at the centre-left of the die, the large output transistors are on the right, with the compensation capacitor at the top. The different layers of the chip are conveniently numbered 1 to 7 at the top right.

Finally, not really a new 741 type but one that gives a bit of clarification on the “Mystery 741” that I showed in the previous article. The chip I found here is identical to that weird one, but with a clearer marking on top. The “RS” refers to RS Components, a well-known UK-based distributor of electronic parts which, at some point in the past, sold generic 741s under its own brand. The “305-311” is the RS part number of this thing, and even today (probably decades after this particular chip was sold), RS part number 305-311 still refers to a 741 in 8-pin DIP, although now specifically referring to the TI device.